In various comments, I've mentioned that I used to wear mini dresses to the office. It was the style and many women did also. A certain person, said 'show us a picture, or it never happened'. Hahahaha….I wonder who that was?

I finally found one taken of me at a company function. I was bringing out some of the food and snagged one piece. I think it was a brownie. They caught me and, of course, I covered my face because it's not polite to laugh with your mouth full of food. It's a wonder I didn't choke. 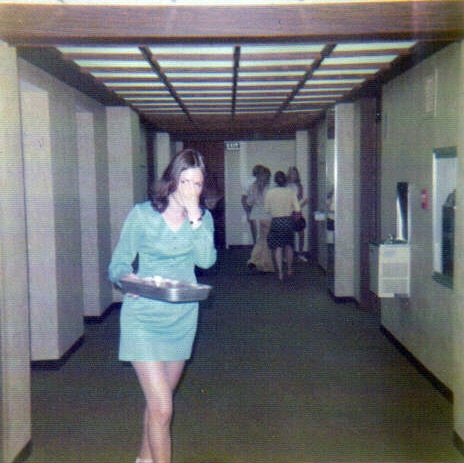 I am retired from real 9 to 5 jobs. I do my artwork and occasionally write poetry. In September 2010, I moved to Fargo, ND after spending 60 years in Phoenix, Arizona. Now, five years later, July 2015, I'm back in Arizona. And yes, I love the heat!
View all posts by pam →
This entry was posted in Uncategorized. Bookmark the permalink.

64 Responses to Yes, it DID happen……Gotcha!