This was a family outing from about 20 years ago. I just found the photos all taken with my 35mm Pentax K 1000. I have had this camera for over 30 years and am still using it.

Our hike took us through the Peralta Canyon which is on the northeast side of Superstition Mountain range. The trail is appropriately called Peralta Trail which leads to Freemont Saddle. Once through the saddle, there is a very picturesque view of Weaver's Needle.

My two daughers, Kathy at the top and Suzy below, at Freemont Saddle. On the other side is the magestic view of Weaver's Needle.

Wikipedia says “Weaver's Needle is a thousand foot high column of rock that forms a distinctive peak visible for many miles around. Located in the Superstition Mountains east of Phoenix, Arizona, Weaver's Needle was created when a thick layer of tuff (fused volcanic ash) was heavily eroded, creating the spire as an erosional remnant with a summit elevation of 4553 ft.

“Weaver's Needle has played a significant role in the stories of the Lost Dutchman's Gold Mine. The Needle's shadow reportedly indicates the location of a rich vein of gold, and many treasure hunters have searched for it. The hunt for gold around Weaver's Needle has been pursued by hundreds (possibly thousands) of people and the area is packed with prospect holes and abandoned camp sites, spent cartridge shells, and possibly missing persons.”

Rather ominous looking aren't they?

One of the many odd rock formations in the Superstitions. I don't know if it has an official name but I call it The Great Ape.

A nice comfortable spot for lunch.

Pretty vegetation along the stream. Seems strange to see this amongst all the rocks and cactus.

All along the rocky path, I managed to spot the tiniest little blue flowers. 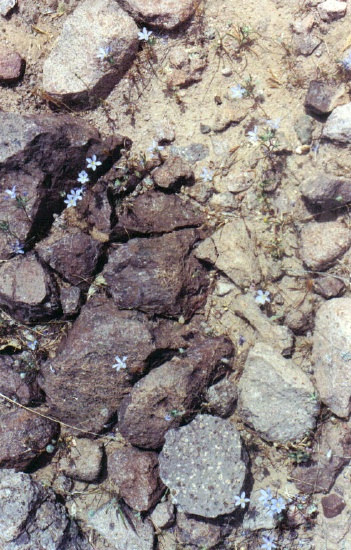 On the way back, my little nephew got tired so his dad carried him. 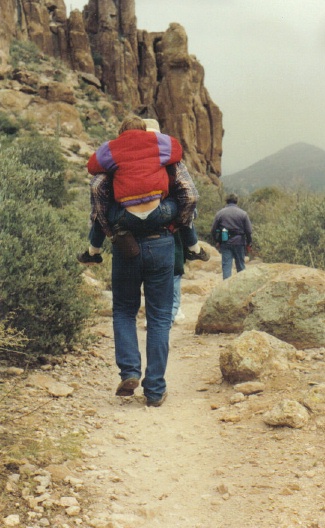 The Superstition Mountain Wilderness Area contains approximately 160,200 acres of very rugged mountainous areas. Some areas are very inhospitable. The trails are marked but are sometimes poor and very rocky or almost inaccessible to the inexperienced hiker. Go off trail and you may get lost forever….seriously.

I am retired from real 9 to 5 jobs. I do my artwork and occasionally write poetry. In September 2010, I moved to Fargo, ND after spending 60 years in Phoenix, Arizona. Now, five years later, July 2015, I'm back in Arizona. And yes, I love the heat!
View all posts by pam →
This entry was posted in Uncategorized and tagged Arizona, life, Peralta Trail, Superstition Mountains, Weaver's Needle. Bookmark the permalink.