From May 1 to the 10th was non-stop for me. I arrived at my daughter and son-in-law’s place in Fargo on the 2nd and we promptly went out to dinner. Below is Gunner and Barney, their sweet and goofy Lab mixes doing one of the things they do best….sniffing. The other is sleeping. 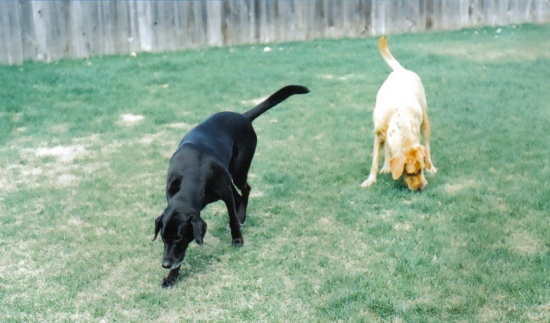 The next day we went driving around a couple of the neighborhoods affected by the Red River flooding. Most areas were still barricaded off and we couldn’t get close to the river itself but I could see all the sandbags still piled six feet high so close the homes. It was astonishing to see how close they were because the river had been almost to the top of the sandbags. It was amazing they held. A diversion is being planned by the city engineers in the near future.

On Tuesday we left for the 11 hour drive to Chicago. All in all, it wasn’t a bad drive except for the last two hours seemed to take forever as it was very late in the evening and I think we were getting a bit tired and crabby. Besides driving through North Dakota, we also passed through Minnesota and Wisconsin. I believe we were on Interstate 94. The drive was beautiful and I really loved Wisconsin with all the hills, farms, lakes and woodsy areas. Both pictures taken through the window of the moving car. I was pretty lucky with these.

The first night in Chicago, we stayed in a hotel because my daughter there wasn’t expecting us till the next night and she hadn’t cleaned. Heaven forbid! We said we didn’t care and we’d help but she also said she had one more paper to finish. The hotel was great but I forget what it was already. I discovered some wood art in the lobby and was taking a couple pictures of the work when the artist, who had been observing me from the coffee shop, walked up to me and introduced himself. He said, jokingly, of course, that he normally charges for taking pictures, then laughed and told me about his work. Anywhere I go, I seem to find art, artists, or interesting things that other people might find mundane.

Staying at my daughter’s in Chicago was great. For the decent rent they are paying, she and her roommate have a great apartment with three bedrooms, plus a small office that could almost be another bedroom. They’ve thought of getting another roommate but they both decided they have too many shoes and clothes that fill up the other rooms. Haha. Some Tulips and a mural on one of our walks:

There are cafes, small boutiques and clubs all over and within walking distance. I hadn’t done so much walking in the last year as I did those few days in Chicago. Every place we went was ‘just around the corner’ they said. Ha! I also experienced the “L” as we took it to UIC for her to pick up her cap and gown. Below is a really cool window display in one of the boutiques.

On another walk around the famous Wrigley Field, I captured two men working on putting up a large "Go Cubbies" sign on a building.

Thursday night was graduation night at UIC. What a grand and exciting occasion. My daughter was beaming. Her sister and I and my son-in-law were so proud. The photo below came out very strange, I guess because of all the different lighting, but I loved her expression. And it didn’t matter to me that her eyes were closed. 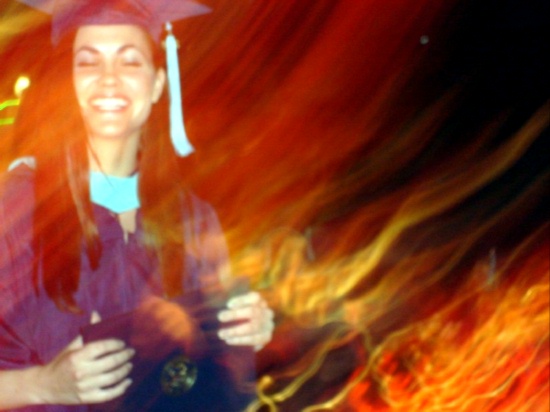 Back in Fargo late Friday night, then a BBQ and a Mother’s Day gift of a manicure on Saturday, then Mother’s Day luncheon at Olive Garden on Sunday, and then back to Phoenix late Sunday night. There were other things in between all that I’ve mentioned but I’ve lost track. My daughter and her husband were great hosts to me in Fargo. I love them all so very much.

I am retired from real 9 to 5 jobs. I do my artwork and occasionally write poetry. In September 2010, I moved to Fargo, ND after spending 60 years in Phoenix, Arizona. Now, five years later, July 2015, I'm back in Arizona. And yes, I love the heat!
View all posts by pam →
This entry was posted in Uncategorized and tagged Chicago, family, Fargo, life, travel. Bookmark the permalink.