As much as I'd like to say I made this birdhouse, I did not. I bought it from a craftsman in the city of Tubac, Arizona at their yearly arts and crafts fair a year ago. He had about 50 of them so it was really hard to choose because they were all so different. I just love this kind of stuff. He had a whole bunch of other things for garden ornaments that he had also made from found objects. This is a teriffic way to recycle.

It was hung underneath my patio eaves so I never thought birds would come near it because it's too close to the patio door where the dogs go in and out all the time. A family of Sparrows have been living in it for the last month. I have tried painstakingly to get pictures of the mom and dad but they are so fast. I've heard babies chirping for the last two weeks and I'm thinking in another week or so, the mom and dad will finally be able to coax the little ones out. I will have to keep a watchful eye on CJ, my little dog, because she is a hunter.

Here I managed to catch the mama leaving the house. 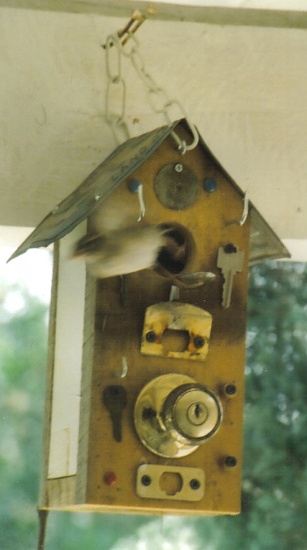 I am retired from real 9 to 5 jobs. I do my artwork and occasionally write poetry. In September 2010, I moved to Fargo, ND after spending 60 years in Phoenix, Arizona. Now, five years later, July 2015, I'm back in Arizona. And yes, I love the heat!
View all posts by pam →
This entry was posted in Uncategorized and tagged Birdhouse. Bookmark the permalink.

29 Responses to My Funky Birdhouse