This painting was done in a studio class with a model. The graphite drawing was done first and because the pose was rather ungainly or, should I say pornographic, I decided to turn the drawing's lower half into an entirely made up engine of sorts. I didn't have any of my engine photos in my possession at the time so I had to ad lib, so to speak. I didn't choose this pose. When we arrived in class, we chose an easel and set up our painting materials. It wasn't till the model was set up that wherever our easels were….that was the pose we had to use. [/ALIGN] 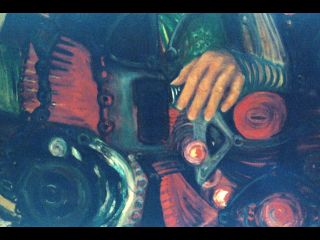 As far as the detail is concerned, I used my own hand as the source as I no longer was attending the studio class and didn't have the model in front of me. That was the actual pose of the model's hand but I chose to use the details of my own to refine it instead. [/ALIGN]

I have mixed emotions about this painting. Sometimes I like it, sometimes not. I DO feel I could add more to it, such as define some of the engine parts more to make them look more real rather than made up. The times I don't like it are when I remember that the model's pose was set up purposefully in my general direction. I know this for a fact and it is rather unsettling. She never cared what pose the teacher put her in. It was just work to her but she was a very good model. She held the pose for 30 minutes at a time and never moved. This model in particular was 6'1", very tall for a female, with a very classic Grecian profile. [/ALIGN]

I apologize because neither of these is a good photo. They seem blurry and there are white specks that I can't get rid of.

I am retired from real 9 to 5 jobs. I do my artwork and occasionally write poetry. In September 2010, I moved to Fargo, ND after spending 60 years in Phoenix, Arizona. Now, five years later, July 2015, I'm back in Arizona. And yes, I love the heat!
View all posts by pam →
This entry was posted in Uncategorized and tagged Art, Diesel, Figurative Art, Oil, painting. Bookmark the permalink.