Out and about in Arizona

The last couple of weekends, I've been driving around a few places in Arizona with my brother and his wife. They like to look at land and homes that are soon to be up for auction. One of the places we visited was Sedona, Arizona which has a population of around 11,000. It is known as 'red rock country' for its beautiful mountains and cliffs that have a pinkish/orangish color but when wet from rain or certain times of the day they look reddish/orange. It's also known for its art galleries and outdoor jazz festivals. It'd be a cool town to live in for me but it's a bit expensive and, right now, there isn't a house there less than $300,000.

With the photo below, I am standing on the same hill looking more NE at Sedona. The rounded hill on the right, with the pointy peak on top is called, would you believe, Nipple Hill. 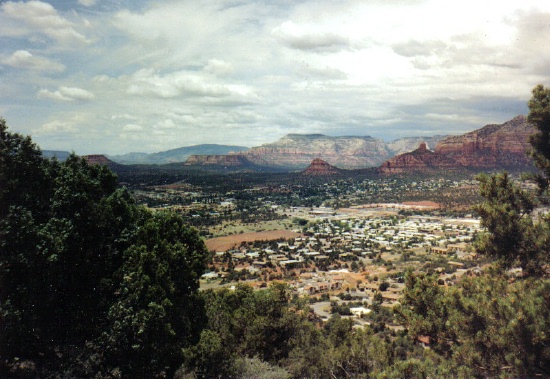 The next two photos were taken in Lakeside, Arizona up in the White Mountains. We used to go up there for a few days in the summer and stay at the Lazy Oaks Resort in one of their small cabins. Very quaint and pretty place with Rainbow Lake right outside the front door of the cabins. We never did any fishing or boating but took lots of leisurely walks along the lake shore, had barbecues and generally just lazed around in the cool, fresh air.

This is one section of the famous Superstition Mountains near Apache Junction, Arizona. I took three photos to try and get the whole thing in and still didn't get the whole mountain range. It is monstrous. There's many old tales about lost gold miners in these mountains. There's plenty of hiking trails in and around the area and we took a few but never ventured too far in. More info here: http://en.wikipedia.org/wiki/Superstition_Mountains

And, last but not least, a sunset from the backyard of my old house.

I am retired from real 9 to 5 jobs. I do my artwork and occasionally write poetry. In September 2010, I moved to Fargo, ND after spending 60 years in Phoenix, Arizona. Now, five years later, July 2015, I'm back in Arizona. And yes, I love the heat!
View all posts by pam →
This entry was posted in Uncategorized and tagged Arizona, Rainbow Lake, Sedona, Superstition Mountains. Bookmark the permalink.

23 Responses to Out and about in Arizona